The discourse surrounding Joker has been happening for so long, you’d be forgiven if you thought the movie had already come out by this point. Long before the movie was named the (surprising) recipient of the Venice Film Festival’s coveted Golden Lion (which in years’ past has gone to films such as Short Cuts, Brokeback Mountain and most recently, Roma) there was anxiety about its impact in a world being ravaged by armed, white men. Director, producer and co-writer Todd Phillips (The Hangover) has spoken at length about why the seriousness of Joker appealed to him (Comedy was too PC for him, boo hoo!); this isn’t just another comic book origin story, Phillips wants you to know that this is a serious, gritty character drama. Then there were the stories about just how far Joaquin Phoenix went down the rabbit hole in preparation for his role as Gotham’s Clown Prince have earned him the status of frontrunner in this year’s very crowded Best Actor race. It has all been exhausting to say the least. But now the movie is finally here to be judged on its merits, for what it is and not the controversy and “what ifs.” The most offensive thing about Joker is how bland, boring and toothless it is.

Phoenix plays Arthur Fleck like a cousin of his Freddie Quell from 2012’s The Master, though trades characterization for mannerisms and tics. There’s that laugh, which comes at the most inconvenient times (it’s a psychological condition!), his lanky body which is contorted several times (for emphasis!) and I would be remiss if I didn’t mention the sheer amount of suffering he endures. Fleck lives with his sick mother (Frances Conroy) in a dilapidated apartment in the center of a rat infested Gotham City that is drowning under (literal) garbage. The gap between the wealthy and the poor couldn’t be any wider, garbagemen are on strike and though his mother keeps promising that the wealthy Thomas Wayne (Brett Cullen) will save the day, Arthur can’t seem see a light at the end of the tunnel. He’s been up several times, first by a bunch of kids and later by some Wall Street bros, fired from his job as a clown for hire and on top of everything else, his dream career as a stand up comic doesn’t seem close to taking off. 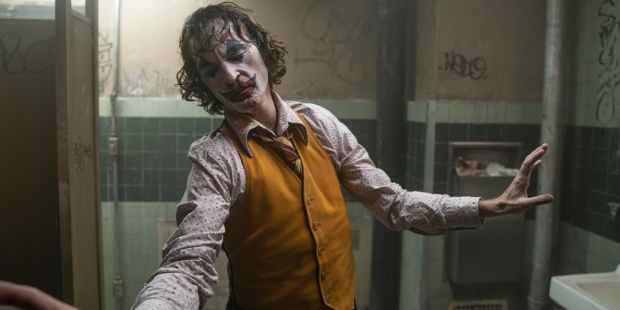 For roughly 3/4 of Joker’s 122 minute running time, bad things happen to Arthur until it’s time for everything to conveniently coalesce together, when he fulfills his destiny and becomes the Joker. We’re meant to understand that our antihero was pushed to his absolute breaking point. This isn’t a wholly original take; 1988’s The Killing Joke comic saw that iteration on the character, a family man and failed comedian, suffering one bad day that left him insane. Though Phillips has been very clear in wanting the film to eschew all the traditional trappings of the comic book genre, one more grounded in reality than its counterparts.

“When we pitched it to Warner Bros and handed the script in, [we wanted to] make it clear, this isn’t f*cking with anything you have going on,” he said. “This is like a separate universe, so much so that it takes place in the past, before everything else.” Phillips cited films like Taxi Driver and The Kings of Comedy as inspirations for this gloomy affair.

And therein lies the mortal sin of Joker, an ultimately incoherent and boring movie that wears its self-declared importance like a badge of honor. Phillips spends so much of his time emulating the aesthetic of his inspirations and does none of the actual work involved with replicating what made those movies the classics they are now revered as. Christopher Nolan’s The Dark Knight was much more effective at presenting a crime drama with the window dressings of Batman’s origin story. And though much of the narrative in that year’s Best Supporting Actor race was dominated by the untimely death of Heath Ledger and his intense method approach, the proof was in the pudding; with less screen time, Ledger sketched the arguably most memorable portrait of the Joker since Mark Hamill voiced the character in the Batman Animated Series. He was a loose canon who lived for chaos and made everything up as he went along, with Ledger making small, deliberate choices (the ever-changing story behind his scars, the now infamous hospital explosion scene) that gave us a peek behind the curtain. Phoenix, following his director’s lead, gives his all to meticulously creating a performance without actually trying to elevate Arthur Fleck from a walking collection of mannerisms to a person. You can’t have a character study without a character. 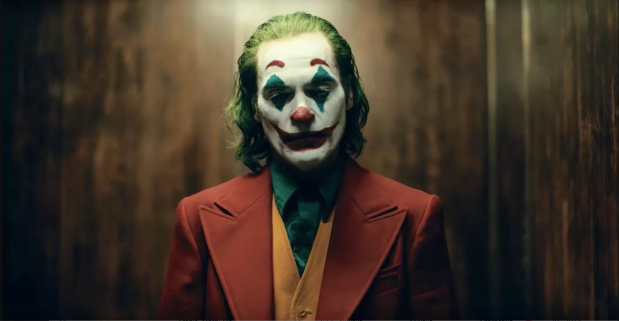 By the time the film starts to bear its teeth and give us a release from the ratcheting tension and gloom, it’s over. As the credits started rolling and a particularly on the nose rendition of “Send in the Clowns” started playing, I laughed. Joker isn’t even polarizing enough as a film that is could live up to being worthy of its own cycle of discourse. Perhaps the most offensive thing about this movie was being expected to pay for it. Honestly, it should have paid me. There’s not even a worthy discussion to be had about the lines it tries to draw to our current reality of violence and the haves and have nots. It’s like Phillips saw the, “We live in a society,” meme and was inspired to film a movie about it, barely scratching the surface. There’s zero interest in either condemning or endorsing his subject’s actions. In fact, Joker wants to have its cake and eat it too; sure violence is bad, but what is a mob of lonely white men to do when they’re pushed to their absolute limit? It’s all artifice and no soul.

Oscar Chances: Phoenix’s narrative and the fact he’s never won an Academy Award may be too irresistible to voters (see Leonardo DiCaprio’s win for The Revenant). His biggest challenger seems to be Adam Driver from Marriage Story, who is quickly making a name for himself as one of the new, great actors (hot off his first nomination for last year’s BlacKkKlansman). I don’t know if Joker has what it takes to land a Best Picture nomination (then again, Green Book won last year), but I could certainly don’t think Production Design, Cinematography and some techs/crafts are off the table. It all depends on whether or not voters can see through the empty charade Phillips has crafted.