Quentin Tarantino movies are known for their cast of eclectic characters, non-linear storylines, lengthy dialogue and excessive violence. The latter, I find, is sometimes unnecessary, but Tarantino is is a filmmaker who loves excess. I can forgive him for that because he’s provided us with some of the most memorable films ever released; Pulp Fiction, Jackie Brown, Kill Bill (Volumes 1 & 2), and even Inglorious Basterds are classics. I can’t say the same for his latest film, The Hateful Eight, which is nothing more than a self-indulgent, overly long snooze fest.

Overly long is actually a generous statement concerning the film’s running time: an unnecessary 187 minutes. The film’s opening title sequence is 10 minutes long, and there’s even an intermission (yes! an actual intermission) which lasts about 13 minutes. Chunks of the film are devoted to exploring every single character’s backstory, delivered in droll monologues. Backstory is important, but when we’re just getting to the action over an hour into your film, you may want to restructure.

Perhaps the smartest thing Tarantino did in the making of this film was casting Samuel L. Jackson as the lead. Though his character, a bounty hunter by the name of Major Marquis Warren, is continually disrespected by everyone else in the film, Jackson shines the brightest. Not even Tarantino’s dialogue can hold him down, and while it’s far from the best performance of the year, it’s certainly the best thing about this film. 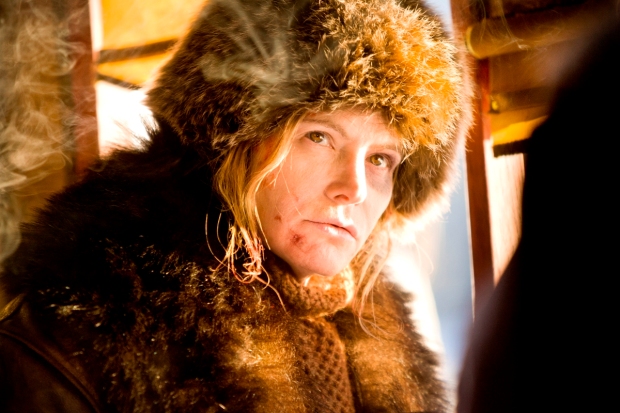 When the film begins, Warren has just encountered a stage coach inhabited by fellow bounty hunter John Ruth (Kurt Russell) and his prisoner, murderer Daisy Domergue (Jennifer Jason Leigh). Ruth is headed into town to hand over Daisy to the authorities for a ton of money when he offers Warren a ride. The three become sidetracked, however, when a blizzard forces them to take refuge in a cabin. It is there that they meet the other principle characters: Sheriff Chris Mannix (Walton Goggins), General Smithers (Bruce Dern), hangman Oswaldo Mobray (Tim Roth), Joe Gage (Michael Madsen) and the inn caretaker Bob (Damián Bichir). Together, they are The Hateful Eight.

The film is literally these eight unapologetically detestable characters spewing ignorant, racist and misogynystic dialogue at one another; It becomes a contest of who can be the loudest and most offensive. The n-word is said 65 times throughout the film’s duration. This isn’t quite as much as in his previous film, Django Unchained, which holds the record with over 100 instances, but it’s still just as unnecessary and offensive. The word is tacked on at the ends of sentences just for the sake of being there, as if Tarantino just felt like ruffling a few feathers (Gawker has chronicled his history with the word, which is every bit as troubling as it sounds). It’s not the challenging move that Tarantino wants to believe it is, nor does it make him a brave or fearless director/writer. Rather, it makes him look childish. He completely ignores the word’s disgusting history, and wants to prove a point about the stigma society places on words. He is not the one to start that discussion, nor does he have anything real to say about it.

Similarly, a running gag in the film is a bunch of the male characters, specifically Kurt Russell’s, beating or hitting Daisy. Leigh, a frustratingly underrated actress, plays Daisy as if she’s the most vile creature in the world. As disgustingly racist and grotesque as her character may be, it’s not funny to watch a bunch of men beat up on her, and certainly not while her character is handcuffed and referred to as “a bitch” the entire time. Leigh has spoken highly about working with Tarantino, and has been earning a lot of Oscar buzz for the role, which leaves me flabbergasted, she’s easily one of Tarantino’s most poorly written characters, man or woman. I’m not sure what happened to the man who used to write such great female roles, sounds like he’s been on vacation for the past few years.

Oscar Chances: Leigh has been the most consistent member from team Hateful Eight on the awards circuit. A win from The National Board of Review, and some nominations from the critics and the Golden Globes boost her chances. But that category is all over the place, so it’ll really depend on whether or not The Academy likes the film or not.