Inspirational, “feel good” movies oftentimes break a sweat trying to earn the audience’s emotions. Through the use of saccharine music, stereotypical character troupes and cliché dialogue, not to mention formulaic plot points. Queen of Katwe, a film that very easily could have fallen into those trap holes manages to avoid all of them while holding onto its uplifting message, hitting you like a shot in the heart.

Based on the incredible true story of Phiona Mutesi (newcomer Madina Nalwanga), a pre-teen girl living in the slums of Uganda with her widowed mother Nakku (Nyong’o), sister Night (Taryn Kyaze) and her younger brothers. They survive by selling maize on the streets, living in a single-room hut. Phiona keeps to herself, although it’s evident there’s a fire burning deep inside of her; she doesn’t take abuse from anyone, standing up for herself when necessary, and refusing to let her harsh reality keep her from hoping something better is waiting for her.

Things change when Phiona meets Coach Robert Katende (David Oyelowo), who works with a church mission program to teaches Katwe’s children the game of chess. Phiona hangs in the corner at first, watching the other children and eating the free food offered to her. But after awhile, she tries her hand at the game only to find out she’s not just a natural, but possess the skill and the fire to make something of her talents.

One of the things that makes Queen of Katwe such a great film is director Mira Nair’s approach. She doesn’t stray away from showing the disparity or the hardship of the slums, but never once reduces it to a meaningless backdrop. These are real people, with real hardships, but their disparity never once defines them as people or erases their rich culture. There’s no white savior to serve as an audience stand-in or as a savior; in fact, there’s no principle white characters, something that is a radical choice not just within this genre, but in contemporary film. This was a conscious choice; though she was born in India, Nair has a deep connection with Uganda. Her husband is from there, and she founded a school in Kampala that focuses on helping its people tell their own stories through cinema.

“I would read these stories about a white woman having her neurosis in this faceless country with a sculptural warrior on the horizon and no one has a name and no one has a line,” Nair told the LA Times. “It’s just about other people’s lives set against the backdrop of Africa. And I got sick of all that, and thought, if we don’t tell our own stories, really, no one will tell them.”

Nair deserves a lion’s share of the acclaim, although she could have never pulled this off without the right cast of actors. There’s something about the rapport between Oyelowo and Nalwanga, who may share different circumstances but are never treated or shot as anything other than equals. In fact, there’s more in common between Robert and Phiona than one might notice at first; Robert never talks down to Phiona, and though he encourages her to hone her skills and gives her the tools to learn and better herself, it’s through her own spunky determination and wit that she achieves greatness; the film doesn’t let us forget this or think otherwise.

Oyelowo, who has proven his incredible gift for magnetism in Selma, astounds in a much more relaxed role here. His natural charisma imbues his performance with just enough to give us a look into Robert’s backstory without having to necessarily tell us. And in the hands of a less capable actress, Phiona might’ve been the same hollow cipher that befalls many biopic protagonists. However, Nalwanga’s infectious luminosity and naturalism keeps that from happening. Much has been made of her “discovery” story, and similar backstory to the real life Phiona, but it’s her performances that deserves to dominate the conversation. 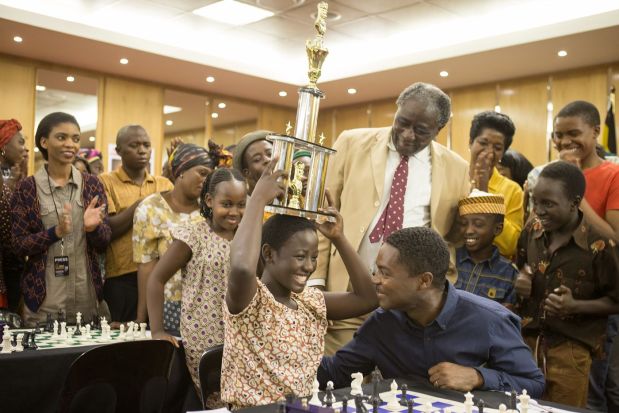 For all of the film’s magic and directorial achievements, it’s hard not to want to immediately gush about the strength of Lupita Nyong’o’s performance. This marks the actress’ first live-action film performance since she won an Oscar for her performance in 12 Years A Slave. Since then, the actress has appeared in Star Wars: The Force Awakens and The Jungle Book but as CGI characters, and while it’s disappointing that such a talent was hiding behind CGI magic, it was a choice that Nyong’o made for herself.

“12 Years A Slave was a film that was so much about my body, and Star Wars is not at all,” she told Buzzfeed in an interview. “There was a liberation in being able to play in a medium where my body was not the thing in question.”

Nyong’o also starred in the acclaimed Broadway play Eclipsed this year, for which she received a Tony nomination. This is her grand return to the big screen though, and a what a return it is. Nyong’o’s performance will make you remember why you fell in love with her to begin with; she may not be the film’s focus, but she makes use of every single frame and scene she’s given. Nakku is a strong willed woman who, like her daughter, has a fire burning deep inside of her that refuses to be extinguished. In a pivotal scene at the film’s climax, she sells a beautiful gown that was given to her by her mother to have money to support her daughter’s dream of becoming a chess champ. The dress, probably the most valuable thing she owns, could have been used to buy food or a home with a roof. Instead, she sacrifices it for her daughter. When the man she’s selling it to offers more money in exchange for the dress and the woman wearing it, the actress immediately hardens her resolve, refusing to be taken advantage of and reduced by a man. The camera holds tight on Nyong’o’s gorgeously expressive face; watching her grapple and ultimately come to terms with what she’s just been told, while gives us a film’s worth of her backstory, all conveyed to us in the duration of a single scene. She may want to do right by her children but she would never be untrue to herself, or compromise her morals to do so, no matter how desperate she may be to do so.

In a perfect world this would be Nyong’o’s “money scene,”or the clip they play when they announce her as one of the women nominated for Best Supporting Actress. And while I’m holding out for her to make it this awards season, it’s not something needed to validate her achievement. Besides, Nyong’o already won that award; this performance serves as a reminder that she’s capable of way more than what she gave us in her Oscar winning debut. Though, someone needs to put her at the center of a major film immediately.

I could talk about how much I love Queen of Katwe all day, a film that takes the practical approach to depicting struggle. Instead of trying to squeeze every ounce of tragedy to elicit emotion from the audience, Nair allows the story of one girl’s brilliance and strength speak for itself. This is a Disney film, but it’s the first in a long, long time that truly earns the audience’s emotion, instead of employing every heavy handed cliché in the book to get there. In the end, Queen of Katwe is a film worth watching because it’s handsomely rendered, expertly told and acted.

The film repeatedly uses chess as a metaphor for life. It’s the game where “the small one, can become the big one,” and how all that matters is what happens when we “reset the pieces, and play again.” That is true both in the game of chess, and in life; Phiona’s story is evidence of just that.