I’m still reeling from the anointment of our current Best Actress winner, Emma Stone of La La Land, which is all but a month old but that doesn’t mean I can’t get hopeful about the next crop of potential nominees. And after watching the trailer for Three Billboards Outside Ebbing, Missouri which stars the always incredible Frances McDormand, what a way to start things off.

The last time McDormand was Oscar-nominated was for 2006’s just alright North Country for a performance she probably could have done in her sleep. Since then, she’s done some work with Wes Anderson and scooped up a million and a half prizes (including an Emmy!) for the excellent Olive Kitteridge. But it’s been awhile since the actress has had a proper, leading, film role. This film looks to be the one that not only changes that, but could potentially earn her yet another Oscar nomination.

The film is all about the story of Mildred Hayes, a woman who lost her daughter in a brutal murder and has a vendetta against the police department for the way they handled the case. So she does what any sane and rational person would do: she takes out billboards that frame the police for the incompetent man-children they really are, to the chagrin of the chief (played by Woody Harrelson).

The screenplay by Martin McDonagh gives McDormand a lot to work with. Foul-mouthed comedy, dry and biting delivery while hinting that there will definitely plenty of room for subtle strokes of the heartbreak that comes with losing a child. If any actress is up to the task, it’s definitely McDormand who sort of played an iteration of this character (to a much quieter degree) during her awards run for Olive Kitteridge. Don’t remember? Allow me to refresh your memory. 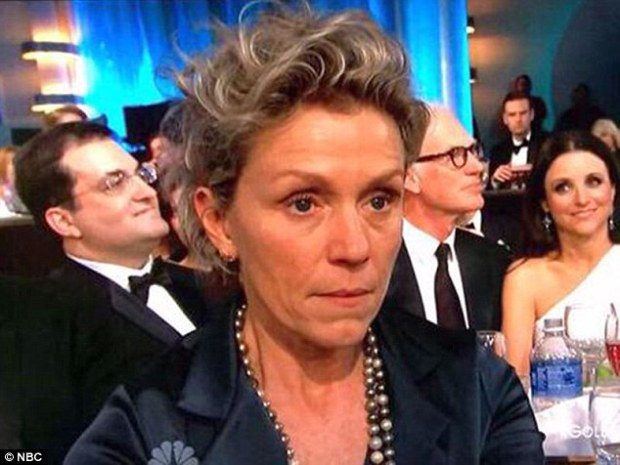 I’d probably look like that too if I were forced to watch acceptance speeches from the cast of The Big Bang Theory or Modern Family too.

But anyway, it’s still early and Three Billboards Outside Ebbing, Missouri doesn’t even have a release date. It is, however, being handled by Fox Searchlight who are probably gearing up to have it makes its rounds amongst the film festivals. They’re coming off a pretty lackluster Oscar year with the one, two punch of the failure of The Birth of A Nation and Jackie‘s underperformance with awards. If they play their cards right, this could be a minor hit and I really think McDormand has a shot at a Best Actress nomination.

Harrelson too, who has never been Oscar-nominated, could find himself with one this year though for a different film: The Glass Castle. Based on the extremely popular memoir of the same name and co-starring Oscar winner Brie Larson directed by Short Term 12 director Destin Daniel Cretton. Harrelson plays an alcoholic father who has a volatile relationship with his daughter (Larson) which is sure to mine a dozen of awards ready moments.

Besides Larson, McDormand doesn’t have any competition. For a film like this, early buzz is a good way to start and this trailer couldn’t have been cut any better. Let’s hope Searchlight learned from their mistakes last year and is ready to elbow their way back into the conversation.

Watch the trailer below.