When Kesha Rose Sebert exploded onto the music scene in 2009, she was something of a wild card. Armed with nothing but the ironic dollar sign in her name (which she has since dropped) and a bunch of glitter, she took the industry by storm. Her inescapable debut single “TiK ToK” would go on to become the second best-selling song of all time and with several successful follow-up singles and a multiplatinum #1 album, she was thrusted into the upper echelon along with Lady Gaga, Rihanna and Katy Perry. By comparison, her image and brand was much less polished; she sang about brushing her teeth with a bottle of jack, and in an interview she casually recounted a time when her vagina was haunted by a ghost. She was a breath of fresh air.

While her party girl aesthetic was hardly new to the world of pop, she sold it in a way that was uniquely her own. She had a deep connection with her fans, affectionately called “animals,” and wrote “We R Who We R” at a time when suicides within the LGBTQ community were making headlines left and right. When she said her mission was to make people just have fun on her short lived reality show, “My Crazy Beautiful Life,” you really believed it. Here was a woman who genuinely wanted to brighten the world with her creativity, and show people that being their true selves was something to be celebrated. But while the party was raging on through the release of her EP Cannibal and follow up album Warrior, something was brewing beneath the surface. Everyone else seemed to be loving the party, except the person that mattered the most: Kesha.

Warrior, though more critically acclaimed when compared to her debut, underperformed commercially. This can be directly attributed to Kesha’s lack of creative control over the project. In a now deleted tweet, the singer/songwriter alleged that she was forced to record and release lead single “Die Young,” which was quickly pulled from radio stations after the Sandyhook School Shootings. 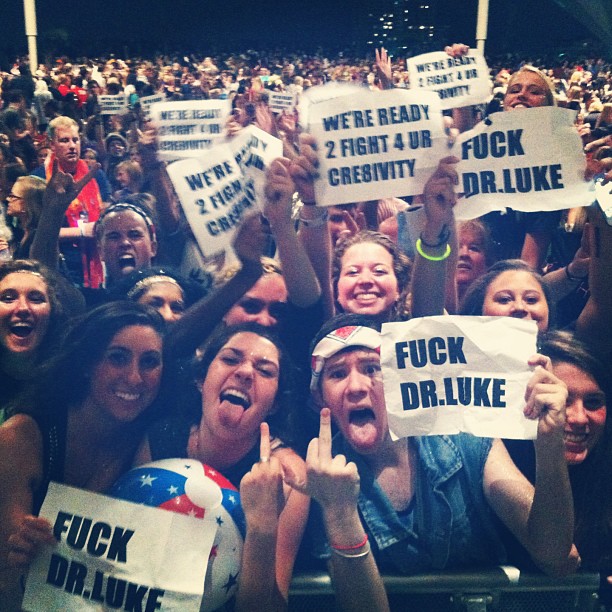 This increasingly visible disconnect between what type of music she wanted to release and what she was actually releasing laid the scene for what would become an incredibly public legal battle between Kesha and her producer/manager Lukasz “Dr. Luke” Gottwalkd. She alleged that Luke not only sexually assaulted her, but body-shamed her into a suicide attempt, which landed her in rehab. Her fans had already known the situation, brandishing “Fuck Dr. Luke” signs at various concerts and starting petitions in an attempt to free Kesha from her recording contract with Luke’s imprint, Kemosabe records, at Sony. The situation came to a head last year when her wishes were denied by a judge, who said, “I don’t understand why I have to take the extraordinary measure of granting an injunction.”

That brings us to the release of Kesha’s first single in four years, “Praying” ahead of what will be her third studio album Rainbow. Stripped down, raw and full of power, “Praying” is a shift away from party anthems like “Take it Off,” but possess the lyrical prowess present on songs like “Dancing With Tears In My Eyes” and “The Harold Song” that may be lost on listeners who take Kesha’s music at face value.

“Am I dead? Or is this one of those dreams? Those horrible dreams that feel like they last forever?” she wonders in the prologue of the official music video? It opens up in black and white, with Kesha floating in the ocean, a very powerful and symbolic image.

“It is my greatest form of surrender to the universe, a full-body prayer — or meditation,” she says of swimming in the ocean in her official essay for Lenny Letter. Faith, specifically prayer, is something that means a great deal to Kesha, something evidenced in the song (and not just because of the title). “I hope you’re somewhere praying, praying /  I hope your soul is changing, changing / I hope you find your peace / Falling on your knees, praying,” she says to an unnamed tormentor. It doesn’t take a rocket scientist to figure out who she’s talking about, but her breathtaking vocal performance drives home the song’s power.

On one hand, it’s wonderful to just have Kesha back after everything she’s experienced, making the type of music she wants to make. “Praying” is hands down her best song and a huge statement, both artistically and personally. For so much of her career, people have underestimated her abilities as a writer and a singer. Anyone who took the time to listen to her brilliant acoustic EP Deconstructed, knows the girl can sing (seek out her cover of “Old Flames Can’t Hold A Candle to You” immediately). But even a listen to some of the deeper cuts on either one of her albums (“Blind,” “Love Into the Light,” “Past Lives”) knows that there’s so much more than the hits she’s known for.

On the other, it’s incredibly inspiring to watch her persevere, both as a longtime fan and a victim of sexual assault myself. Dr. Luke used his clout as one of the most successful producers working today to try and intimidate her into staying silent, something that is unfortunately a disease within the music industry and the world at large. But Kesha has continued to live out the the lessons she’s always taught her fans: to never back down, and to stay nothing less than true to yourself, even if everyone around you is shaming you for it. It’s a shame that such a beautiful achievement has to come as a result of such terrible abuse, and that people are finally singing the kinds of praise that this woman has deserved for the later part of her career. Even more terrible that such strength is being asked of her, as her abuse story plays out on the public stage for all the world to see. As unfair and terrible as all of this has been, Kesha has displayed an immense amount of strength and courage; she is nothing short of an inspiration.

I remember “We R Who We R” came out during my senior year of high school, on a day I skipped and came home after my mom had left for work, thinking I had driven myself to school. I did this often in an attempt to dodge the bullies that tormented me day in and day out. Sometimes I would take myself to the movies, but other times I would just sit in my room and stare at the wall and think, uninterrupted. It seems like such a small thing to be alone at home with simply my own thoughts, but back then this was my sanctuary. On this particular day, I just happened to be laying in bed on Tumblr when I saw an audio post of “We R Who We R.” In the caption, there was a link to a new video Kesha had recorded for It Gets Better.

“I was really affected by the suicides that have been happening, having been subject to very public hatred [myself],” the singer told Rolling Stone. “I have absolutely no idea how these kids felt. What I’m going through is nothing compared to what they had to go through. Just know things do get better and you need to celebrate who you are. Every weird thing about you is beautiful and makes life interesting. Hopefully the song really captures that emotion of celebrating who you are.”

“We R Who We R” would go on to become one of the most played songs in my iTunes library, and right up until graduation I found myself revisiting Kesha’s video hundreds of times (I had even bookmarked it on my iPod Touch to watch on the go, just in case I needed it while at school or something). Though running at only a minute long, her empathy resonated with me in a way I couldn’t understand at the time. For so long I found myself running and ducking that I never really stopped to even listen to words of encouragement about being myself, because I refused to acknowledge myself. But seeing Kesha being unapologetically herself in interviews, through her music or public performances was a reminder that being myself was not the issue.

Without Kesha, I don’t know if I would have made it, and I know I am not alone. She has meant so many things to so many different people; it’s our job to lift her up the same way she has done with her music, and various efforts throughout her career. Her acceptance speech after receiving the Human Rights Campaign’s Visibility award highlighted her love and devotion to the LGBTQ community.

“I’ve met many members of the LGBT community, and some very very close friends, who have come close to taking their own lives because of the abuse they’ve had to deal with,” she said very solemnly. “I don’t want to live in a world where we treat each other like that. That’s why my message has always been about being yourself… Believe me when I sing these words, I’m talking to myself as much as I’m talking to everyone else.”

At the end of the music video for “Praying,” Kesha walks off of the floating makeshift barge she was previously laying on, and begins walking on water with a beautiful rainbow in the background. The words, “the beginning” appear onscreen before it fades to black, signaling a new chapter and a personal promise.

” I am so happy and grateful to begin sharing all the music I have been writing with the world,” she wrote in her Lenny Letter essay. “I’ve written a record that reveals my vulnerabilities, and I have found strength in that. In the past, I’ve always felt like I was trying to prove something, trying to be someone I thought people wanted me to be, but on this record, I’m just telling the truth about my life. This album is me. The most raw and real art I have ever created, and now it’s my gift to you. I hope you love it. Thank you for not giving up on me. We made it <3. I love you all so much.”

Even if there was no more music to follow, I’m glad to know someone I looked up to has found the same joy and support she has selflessly provided to people throughout her career. So thank you Kesha, we can’t wait to see what’s next.