After last night’s La La Land dominance at the Golden Globes, it would be easy to say that all is said and done and that its march towards the Oscars is complete. All seven awards, including Picture (Comedy or Musical), Director, Actor and Actress (Comedy or Musical) and Screenplay went to Damien Chazelle’s musical which has been tearing it up at the Box Office. La La Land also boasts top honors from the Broadcast Film Critics and the Toronto International Film Festival, two prizes that certainly don’t hurt when trying to win Best Picture at the Academy Awards.

La La Land‘s biggest competition was thought to be Moonlight (which won the Drama Globe for Best Picture) and Manchester By The Sea (which won Actor in a Drama). Both films landed Screen Actor’s Guild Ensemble nominations where La La Land did not, indicating weakness from La La Land amongst the biggest voting block in the Academy: the actors. Even films like Beasts of No Nation which only had three credited actors (and only one of them being well known) was able to land a nomination last year. But one film that is absolutely tearing up the box office right now, and won nominations from the Screen Actors Guild and Writers Guild that I believe many are underestimating in the long game is Hidden Figures.

The film just beat Rogue One: A Star Wars Story at the box office for the number one spot, raking in an astounding $22.8 million from just 2,471 theaters (that’s 1,686 less than Rogue One was playing at by the way) on a budget of $25 million. It’s a bonafide crowd pleaser, earning a very rare A+ from CinemaScore, which surveys audience’s experiences/opinions while leaving the theater. It also earned a very respectable 74 from Metacritic, and an outstanding 93% on Rotten Tomatoes.

The thing about La La Land and the Golden Globes, is that the Hollywood Foreign Press doesn’t vote on the Oscars. It’s true that the Globes fall smack in the middle of voting, however, and so seeing Emma Stone and Damien Chazelle deliver speeches and win doesn’t hurt if there are any voters in in the room or watching at home; it doesn’t hurt to be a winner. But at the end of the day voters will vote for what they like, and while I’m still predicting a ceremony in which La La Land takes the top prize, I think Hidden Figures is a huge spoiler in several categories and believe it’s got the juice to join Moonlight and Manchester By The Sea as La La Land‘s biggest competitor, maybe even more than those two.

The box office success story is huge, because very few films poised for Best Picture nominations are huge box office hits. La La Land looks well on its way to hitting $100 million domestically, especially as it rolls out into IMAX and earns a bump when the nominations are announced. I think Hidden Figures will have zero problem joining it as well, and perhaps Fences gets close to that mark too (it’s been doing very well at the box office, despite a 40% decrease this past weekend). The Academy wants people to tune into the telecast, and more people are going to tune in if films they’ve seen are recognized. That’s not to say Moonlight and Manchester are not box office successes in their own right, but they’re not on the path to clear $100 in the U.S. alone, at least not at this point. And with nominations yet to be announced, Hidden Figures has plenty of time to build momentum with being a late breaking release.

Hidden Figures also has something La La Land doesn’t have: the support of the actors. It’s true only Octavia Spencer landed an individual nomination where La La Land had two, but that SAG Ensemble nomination is nothing to shrug off. There is no explanation as to why it missed, especially when films like Captain Fantastic made it in, other than they liked other movies more. It’s also strange, because La La Land has been poised as the surest thing since its premiere at Venice, yet Moonlight has been gobbling up so much of its victories. The Globes were always going to eat up La La Land with a silver spoon, to varying degrees, but once you get into the Guilds it’s a whole different ballgame. 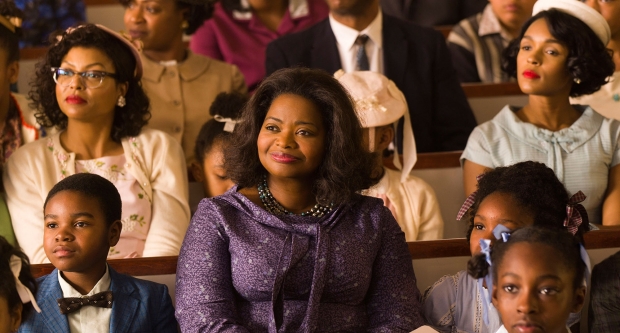 And so I think Hidden Figures is poised to shake up the Oscars in a big way. And while I’m not ready (yet) to proclaim it will trounce La La Land for Best Picture, I am ready to say that nominations that once seemed like dark horses don’t seem so unrealistic anymore. Like Screenplay, Production Design, Costumes, Original Song, Score and double Supporting Actress nominations for both Monáe, who was nominated twice by SAG as part of the ensembles for Moonlight and Hidden Figures and Spencer, who won in this category a few years ago. Best Actress is so competitive with several spots still up for grabs, but I think a nomination for Taraji P. Henson makes a lot of sense. Am I as sure as her getting in as I am that Emma Stone and Natalie Portman will? No. But if someone like Emily Blunt can get in for The Girl On The Train, it shows that category is more fluid and bound for some sort of an upset. There’s always a few on nomination morning, and Henson’s status as a previous nominee for Benjamin Button, and her popularity on Empire only bolster her chances.  The Academy loves their ‘Based on a true story” films, but Hidden Figures being a story about the black women who were responsible for John Glenn’s space launch is something that absolutely deserves to be rewarded.

I could be totally wrong though. After all, doesn’t the thought of the Academy rewarding a musical about Hollywood set in L.A. with Emma Stone and Ryan Gosling at the center of it all sound like something they’d do? But something really doesn’t sound right in a year as rich as this one for La La Land to sweep the Oscars in the same way The Artist did. I also think people are vastly underrating Fences‘ chances, a film that is all about its acting, and features powerful, master class performances from Denzel Washington, Viola Davis (who is absolutely winning her first Academy Award) and Stephen Mckinley Henderson with a screenplay by the late, great August Wilson. And while I’ve already mentioned Moonlight‘s position in the race, the standing ovation Barry Jenkins got as he accepted his Golden Globe last night is extremely important. People love this movie.

All I’m saying, is that this is far from over.