It’s actually kind of unbelievable that it’s taken this long for the story of Tonya Harding to make it to the big screen. As one of the characters in I, Tonya says at one point, the story has all the makings of a movie; it was the story that (pre-O.J. Simpson) captured everyone’s attention, and gave us one of history’s most infamous underdogs turned anti-heroes.

Working from a script written Steven Rogers (Hope Floats, Stepmom), director Craig Gillespie (Lars and the Real Girl) attempts to let Tonya’s hear side of the story, and if she has anything to say about it, she wants you to know that none of it was her fault. Much like the woman at the center of it all, I, Tonya is anything but conventional. It’s rigid, unapologetically sloppy but undeniably fascinating and entertaining; I dare you to try and look away. The humor is biting and dark in a way that may make you second guess your laughter. But don’t worry, Gillespie knows everyone is in on the joke and makes sure that you are too.

The film introduces Tonya as a child who was not so much pushed onto the ice so much as shoved by her domineering mother, LaVona (an excellent Allison Janney). Their relationship is, in a word, volatile, though even that feels like an understatement. There are stage mothers who mold and shape their child to be what they could not, and then there’s LaVona. “I’m a gardener who wants to be a flower. How fucked am I?” she jokes at one point. In the hands of a less capable actress, the performance might have chewed through all of the scenery until there was nothing left but LaVona and her indelible bird (which was actually real!). But Janney is clearly having the time of her life, injecting gut busting humor into each venomous line reading (at one point she tells the fictional off-screen director, “Well, my storyline is disappearing. What the fuck!”), wearing LaVona’s inherent cruelty as comfortably as she does the oversized glasses, cropped hair and permanent scowl enshrined across her face. She uses words and violence not to mold, but to cut the way a butcher might with a piece of meat. If you asked her, this is all to build her daughter into “a champion,” but all it really does is ensure that Tonya will never feel comfortable in her own skin. 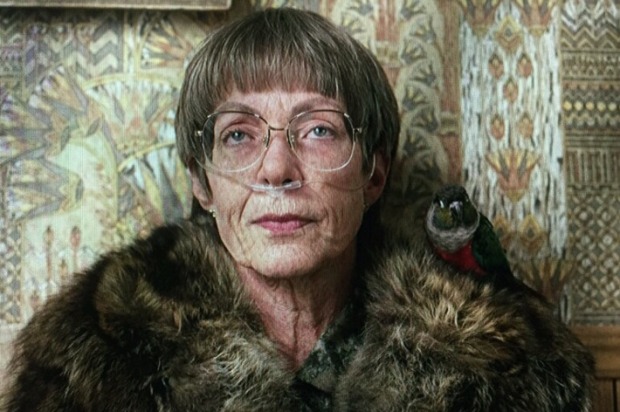 By the time we’re introduced to 15 year old Tonya, Robbie has taken over for child actress McKenzie Grace (Gifted). She meets Jeff Gioley (Sebastian Stan) who she feels, after a living a life of cruelty under her mother, could be good for her. Like a lot in Tonya’s life, it turns out that she’s wrong; what begins as a courting between two outcasts devolves into a toxic and abusive relationship. It’s Jeff that will ultimately be her undoing, and set the inevitable attack on Nancy Kerrigan in motion. But Tonya escapes when she’s out on the ice, determined to be the best skater on her own terms. She knows she’s just as good, if not better, than the more pristine and polished skaters and quickly recognizes the judges are holding it against her by giving her lower scores. She smokes like a chimney, curses, makes her own costumes and skates to ZZ Top, which isn’t in line with the wholesome image the association is trying to promote. But it’s when she has her moment of glory in becoming the first American woman to successfully land the triple axle in competition that she gets the love, respect and validation she has craved her entire life that’s been withheld by her mother and husband.

Much attention has been paid to the level of “de-glam” that Robbie has undergone to complete her transformation into the disgraced figure skater. There’s a lot of terrible wigs, bushy eyebrows and gaudy costumes, but Robbie doesn’t let any of that get in the way of delivering a first rate performance. She nails Harding’s hardened exterior as a foul-mouthed, redneck princess. However, it’s the quieter moments where she conveys Tonya’s insecurities and innate contradictions that she really shines the brightest. She’s a woman who has been chewed up and spit back out by life, but refuses to say “I give up.” At the same time, she’d have you believe that she played absolutely no role in her own fall from grace; life dealt her the cards, Harding just played them. There are moments where you’re really willing to believe her, largely in part to Robbie’s charismatically live-wire performance. I can already see a lot of people saying, “I had no idea she had this in her,” and to them I say revisit her work in The Wolf of Wall Street and her scenes in the otherwise abysmal Suicide Squad, where she made magic out of what could have been empty, one note characters.

In Gillespie’s hands I, Tonya matches its subject’s electricity, with the camera moving just as fast as Harding does when she’s out on the ice. We’re told that this will be based on a “irony-free, totally contradictory” series of interviews with Harding, Gioley, LaVonna and the rest of the zany cast of characters that fill out this already pretty unbelievable true story. Characters interrupt one another at several points to interject and contradict something you just saw happen, or you thought you saw happen. There’s a lot of winking and breaking the fourth wall, and while these moments don’t always feel as intelligent as they think they are they also don’t feel heavy handed. The film resembles the love child between a Christopher Guest mockumentary and a wannabe Coen Brothers crime story told by Martin Scorsese, who also arranged the soundtrack (think Goodfellas-lite meets Burn After Reading). In another world, that might’ve been intended to be be a knock on the film’s quality. But I, Tonya is, against all odds, a perfect marriage of source material and execution. 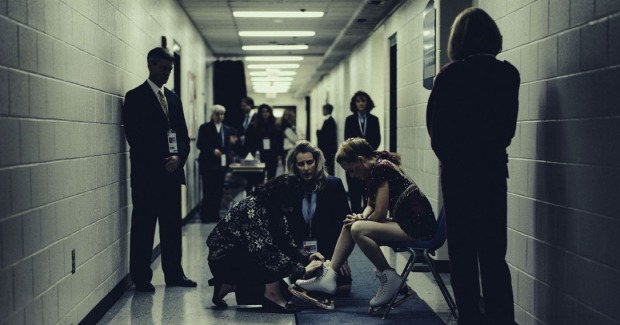 I’ve read a lot of criticism directed towards the film that claims its complicit in rendering her as a national punchline, which doesn’t really hold true to me. Much of the finger pointing and laughing is at the expense of the men around Tonya, especially Jeff and his sidekick Shawn (Paul Walter Hauser). I’ve also read an equal amount that alleges the film is trashy, and shoddily made. There’s some truth to that, especially during the skating sequences where Robbie’s head was superimposed on a professionals body (and it shows). It also starts to lose interest in Tonya around the third act, and spends far too much attention on Jeff and Shawn. These scenes are where a lot of the laughs come in; how did “two of the biggest boobs,” as Bobby Cannavale’s character astutely labels them, manage to pull this off? But even when it the film does wander, or the tone does a 180, Robbie and Janney manage to reel it back in with their dedicated performances; they are the film’s anchor. Without them, I, Tonya wouldn’t work at all.

Ultimately, the film is about America’s fascination with tearing down our heroes. “America, you know, they want someone to love, and they want someone to hate, and they want it easy… There’s no such thing as truth, I mean it’s bullshit… Everyone has their own truth, and life does whatever the fuck it wants.” Harding says at one point. In I, Tonya the truth has been just as mistreated and masticated as its anti-heroine, refracted through our cast of unreliable narrators. And while she may have been stripped of her ability to compete, no one will ever be able to take away her ability and skill. As one of the characters says in the beginning of the film, “Tonya is America.” I, Tonya doesn’t let you forget that even if it was just for a moment, Tonya Harding was the best.

Oscar Chances: Janney emerges from I, Tonya as the undisputed frontrunner for Best Supporting Actress. Not only does she deliver a deserving performance, but she’s got the narrative: beloved, long-working actress who has never won an Oscar. A bonus for her: there’s not really a whole lot of competition! Both Melissa Leo (Novitiate) Octavia Spencer (The Shape of Water) have already won in the past, nobody seems that enthused about Kristin Scott Thomas in Darkest Hour, and who knows if the Academy will go as hard for Lady Bird as people are predicting (which would put Laurie Metcalf in competition). Robbie has a harder hill to climb, but nabbing a Gotham Nomination makes her sliding into the top five seem a bit more probable, especially when you consider her star is on the rise. A Musical or Comedy Golden Globe seems like an easy grab, but new distributor Neon will have to mount a massive campaign to get her into such a competitive category stacked with previous nominees and veterans like Sally Hawkens, Frances McDormand, Judi Dench and Emma Stone.