“I just want you to be the best version of yourself.”

“What if this is the best version?”

Greta Gerwig’s directorial debut, Lady Bird, is about a lot of things. It’s a coming of age story about a high school senior coming into her own, although she hasn’t quite figured out who she’d like to be yet. It’s an earnest and honest portrait of growing up with aspirations and dreams yearning to break through the restrictive boundaries of your small, familiar town. But first and foremost, it’s about a mother and a daughter, their complicated love for one another and how similar they are despite their insistence that they couldn’t be more different. Gerwig has taken one of film’s oldest tropes and made it feel brand new.

Christine McPherson (Saoirse Ronan, never better) is bored. She’s bored with her name, so she gives herself a new one, “Lady Bird,” much to her mother Marion’s (an amazing Laurie Metcalf) disdain. She’s bored by her life in Sacramento, California, so she’s making plans to look at liberal arts colleges on the east coast. Ones that are similar to Yale but not Yale because she “definitely” couldn’t get in. “The only thing exciting about 2002 is that it’s a palindrome,” she complains at one point. Lady Bird would desperately love to live through something. As she and her mother tear up to “The Grapes of Wrath” on cassette on their way home from visiting colleges, they argue over who knows what’s best for Lady Bird’s future. It’s incredible to watch Ronan and Metcalf go back and forth; you’re completely transfixed by how easily the lightning-quick dialogue just flows so effortlessly between the two. And just when you think you’ve figured out what the next 93 minutes are going to be like, Lady Bird opens the passenger door of her mother’s moving car and falls out in a sequence that shocks you so much that you almost forget to laugh. Things move pretty fast in Gerwig’s retelling of adolescent life in post-9/11 Sacramento, though she finds plenty of room for honest and hilarious surprises among familiar story beats.

While she plans her great escape from her self-described menial existence, Lady Bird takes her first steps into exploring the muddy waters of love. First with her fellow thespian Danny (Manchester By the Sea‘s Lucas Hedges) and then with a wannabe edgy and deep heartthrob Kyle (Timothée Chalamet). She grows apart from her best friend Julie (Beanie Feldstein, incredible) and grapples with her family’s financial insecurity. Her father Larry, (Tracy Letts) encourages Lady Bird to spread her wings and shoot for the stars, but her mother urges her to see things more realistically which is the root of their contentious relationship. Although there have been plenty of films documenting the dynamic between a strict mother and her rebellious daughter, few have felt as true as the one at the center of Lady Bird. Ronan and Metcalf turn in a pair of performances that feel so lived-in that they could have passed for a real life mother and daughter had I known less about pop culture than I actually do.

As much of a joy as it is to see the two go back and forth, Lady Bird is yet another example that Saoirse Ronan is one of the most talented actresses of her generation who just keeps getting better. After breaking through as a teenager in the first chapter of Atonement back in 2007 and transitioning into leading lady status with Brooklyn just a few years ago, she delivers the performance of her career here. She rips through Gerwig’s dialogue as if it’s nothing, tossing off lines that left the audience in stitches with absolute ease; her comedic timing is impeccable. But it’s the way she balances Christine’s sardonic persona with the burgeoning realization that she just might not have it all figured out that makes her work feel like such a revelation. Is there anything she can’t do? It would have been easy to play a sarcastic teenager who thinks the world is against her, but Ronan is too smart to reduce Christine to a cliché; you definitely knew this girl in high school. 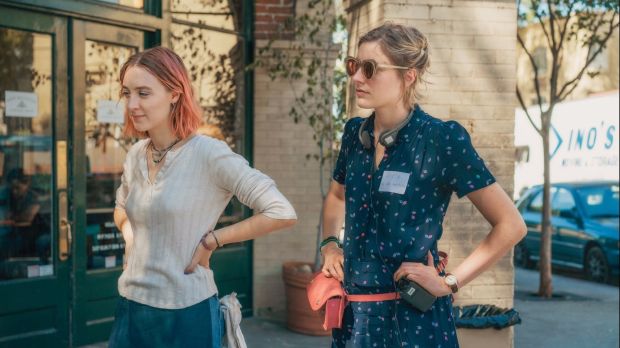 But it’s Gerwig who deserves the lion’s share of praise for pulling off such an incredible feat of filmmaking. Her collaborations with Noah Baumbach as a co-writer (particularly Frances Ha, which she also starred in) suggested she was capable of much more than simply acting. With Lady Bird, Gerwig emerges as a triple threat; even though she doesn’t appear onscreen, we can feel her presence in every frame of the film. Whether it’s through Ronan’s performance or the exemplary, biting dialogue. “You’re going to have so much unspecial sex in your life,” Chalamet’s character says to Christine after she discovers he’s not a virgin after all, just one of the many great one liners within the film. No matter how small the role, Gerwig gives her actors respect and room to breathe; these characters feel more like people who were plucked right from the streets of Sacramento. The film could have easily been lite Girls or Juno, but each moment feels like it was taken from straight from her teenage diary. Christine may want nothing more than to fly the coop, but in Lady Bird Gerwig asserts that home is where the heart is, no matter how contentious or complicated that home may be.

Oscar Chances: I worry if A24 can market the campaigns of all the films they have in the race this year; The Florida Project is emerging fast as the favorite this year, but they still have December’s The Disaster Artist waiting in the wings. Metcalf could benefit from a very fluid Best Supporting Actress race this year; she’s a veteran who just won a Tony, and her performance is one the meatiest she’s had in years. Ronan has a much harder hill to climb with Actress being so competitive this year. She already has two nominations under her belt, and a third would be record setting. But are they going to love the film as much as everyone else? Will they dismiss it as simply another coming of age film?

Gerwig absolutely deserves to be in the Best Director conversation, but it’s been almost a decade since The Academy nominated a woman, and the buzz is louder around Patty Jenkins for Wonder Woman, who has the edge of helming a big budget blockbuster that was also one of the critical success stories of the year. I could see an Original Screenplay nomination, but again, how will A24 manage the campaign?