I’ve been thinking about Barry Jenkins’ Moonlight from the moment its gorgeous trailer premiered over the summer. I hadn’t heard anything about it before that, but the buzz around the film became inescapable after. Film critics and various writers were all enamored like I was, while the lucky few who had seen the film in some capacity all had the same message: This was a film to watch out for, and see at any cost.

Suddenly it was announced that Moonlight would be screening at the Telluride Film Festival, with screenings at the prestigious Toronto and New York Film Festivals to follow. It’s clear that following the success of Room and Ex Machina last year, the film’s distributor A24 was not messing around with this one and if the word of mouth out of Telluride is any indicator of what’s to come, Moonlight is in it for the long haul.

Rapturous doesn’t even begin to describe the response the film has received since its premiere. Awards Daily’s Sasha Stone said it was “One of the best films I’ve ever seen.” while Vanity Fair’s Richard Lawson called it “A breathtaking film, one with political urgency and a deep, compassionate humanity.” Variety’s Peter Dubruge  said Moonlight is “a socially conscious work of art as essential as it is insightful. 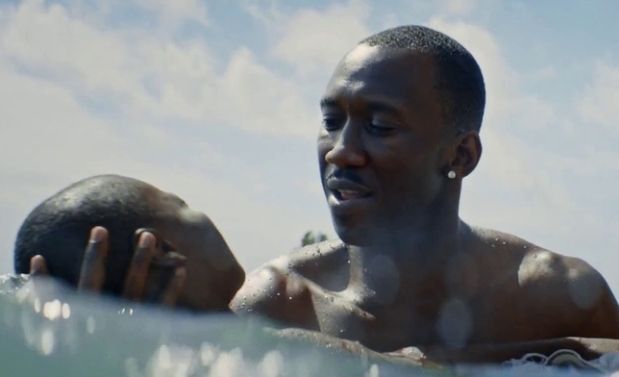 The film follows a man through three pivotal periods of his life: childhood, adolescence and adulthood. As a child, he’s teased incessantly for being gay and alienated from his drug addicted mother (Naomie Harris). The older he gets, the more he struggles with his blooming sexuality and sense of self. That’s about all the trailer really tells us, though that’s all we really need. Moonlight looks like a film that needs to be experienced as a whole, and not told to us in little bits. I’d rather know less about the plot so I can be wowed when it’s time to see it.

So, can Moonlight make it to the Oscars? With the odds seemingly stacked against them, A24 took Room all the way to Oscar glory in a way no one saw coming. Outside of Brie Larson’s performance, the new kids on the block netted the film a surprising pair Best Picture and Best Director nominations. The Directors’ branch has also proven time and time again they’re not against nominating newcomers at the expense of seasoned veterans like they did with Beasts of the Southern Wild‘s Benh Zeitlin. There’s a precedent for a small, critically adored film like Moonlight to go the distance. And with premieres at all of the big name festivals, A24 has found a way to keep the film on everyone’s minds until it’s released in October.

“The cast is so uniformly excellent it could threaten to win the Screen Actors Guild’s ensemble prize,” writes Variety’s Kris Tapley. The actors branch, being the largest voting block within the Academy, would provide just the right amount of support Moonlight would need to break into the acting races, particularly Naomi Harris whose current competition includes Manchester By the Sea‘s Michelle Williams and Billy Lynn’s Long Halftime Walk‘s Kristen Stewart in Supporting Actress. There’s also a chance for any one of the three actors who portray the main character at each stage of his life to find recognition, though it’s difficult to say where each performance would land depending on the amount of screen time.

The film could also find love in the cinematography category (based on the arresting nature of the trailer alone) and the Adapted Screenplay category as well; the film’s screenplay was adapted from the play In Moonlight Black Boys Look Blue by Terrell Alvin McCraney. With La La Land‘s coming out at Venice (coupled with its successful screening at Telluride) and now Moonlight, it would seem as if we have two new Oscar frontrunners to talk watch out for.